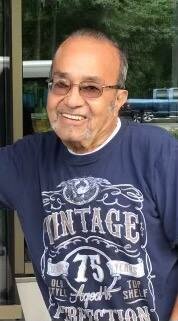 Please share a memory of Raymond to include in a keepsake book for family and friends.
View Tribute Book

the son of Miguel Vazquez and Juana M. Rivera. When he was still a child, the family relocated to Queens, New York, and this is where he would live for the majority of his life. As he had a passion for cars, and was mechanically inclined, Raymond would go on to attend Automotive High School in Brooklyn, New York. He would turn this passion into a 30+ year career in automotive industry. Raymond also served two years in the U.S Army.

As a teenager growing up in Astoria, Queens, Raymond would eventually meet his future wife, Ramona Linda Sanchez. Together, they would go on to raise four children and sustain a marriage that would span over four decades.

Besides his love of cars, Raymond had a true love of fishing. Whether he went alone

or with his fishing buddies, he would wake up every Sunday before the sun rose with a tackle box and fishing pole in hand. It did not matter if he returned with a bucket filled with

the day’s bounty, or empty handed, he needed to be there as the sun’s rays glistened

on his trusty reel.

Together, Raymond and Ramona would do their best to expose their four children to different activities and life experiences that would lay the foundation for future growth. Whether it be attending a dance recital for Nancy or Grace, or a baseball game for Raymond or Miguel, Raymond would be there to lend his support. The little things such as going to an amusement park, or spending a day at the beach with his family, would be the moments that created lasting memories. Raymond was also a loyal hard core NY Mets fan.

Raymond soon became a grandfather to seven grandchildren, Eliza, Kayla, William, Melisa, Brianna, Anjelina, and Edward III would become the next generation that would literally look up for guidance from the patriarch of the family. Along with his grandchildren, Raymond is survived by his four children, Raymond Jr., Nancy, Grace, and Miguel.

Raymond now joins his loving wife, Ramona, as they embark on a new journey beyond the pearly gates of Heaven.

To send flowers to the family or plant a tree in memory of Raymond Vazquez, please visit Tribute Store
Monday
8
November

Share Your Memory of
Raymond
Upload Your Memory View All Memories
Be the first to upload a memory!
Share A Memory
Send Flowers
Plant a Tree