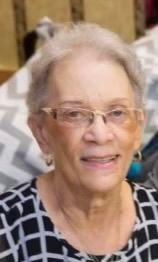 Please share a memory of Gwendolyn to include in a keepsake book for family and friends.
View Tribute Book

Gwendolyn Ann Greene was born to the late Leon and Dorothy Griffith on September 17, 1934 in Harlem, NY. Gwendolyn graduated from Central Needle Trade High School in New York, New York in 1951. She married the late Vincent Collins and from that union came two daughters Cheryl and Peggy and one son Vincent.

Gwendolyn worked as a Seamstress at Minerva Hyco for many years. She also worked at Gertz Department store as a Sales Associate for a couple of years. In 1966 she joined NY Telephone Company as a Directory Assistance Operator. After a few years as an Operator she was promoted to a Supervisor and later retired as an Assistant Manager.

Gwendolyn had a passion for sewing and crocheting and every baby born to family and friends received a crocheted blanket. Gwendolyn and George enjoyed hosting card parties with their friends and family. Gwendolyn enjoyed babysitting her “baby Sheldon” from 3 months old to 14 years old and he calls her Grandmommy just like all of her other grandchildren.

Mother Greene, as she was affectionately known in the church, dedicated her service to God by serving in the choir at her home church of Bethel A.M.E. Church in Freeport, NY from 1988 until she moved to Charlotte, NC in 2013. She transferred her church membership to New Covenant A.M.E Church in Charlotte, NC and was a member until she was called home on Friday July 9, 2021. Gwendolyn was preceded in death by her husband George Robert Greene and two great grandsons, Tony and Robert Spells.

To send flowers to the family or plant a tree in memory of Gwendolyn Greene, please visit Tribute Store
Wednesday
21
July

Share Your Memory of
Gwendolyn
Upload Your Memory View All Memories
Be the first to upload a memory!
Share A Memory
Send Flowers
Plant a Tree