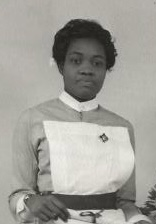 Please share a memory of Veronica to include in a keepsake book for family and friends.
View Tribute Book

She was born April 22nd, 1939 in Kingston Jamaica to late Harold T Smith and

Sarah J Smith. Veronica was an exceptional child! She was very obedient, never had to be punished unlike her brother and sister.

Upon graduation her aunt invited her to Bermuda and from there they both went on a vacation to Jamaica. It was then she reunited and married Solomon Tater. Thereafter she left for England and came and settled in America.

Solomon then migrated to America and they began to start a family. Out of this union their daughter Alethea Gissle Tater was born! Veronica began work as a nurse at the Jewish Home located in Manhattan NY and continued her nursing career at several other locations throughout New York.

While working, Veronica attended Hunter College, Pace University and St. Francis College in effort to obtain her Bachelor’s Degree in Nursing. For several years Veronica used her nursing skills and later retired from The Silver Crest Center Nursing home. Her soft spoken voice and relaxing demeanor was her tools to assist others on their road to recovery. Her dedication to her career and the people she cared for was her purpose and calling from the most high.  As a nursing a supervisor she encourage and 3hmmotivated her staff to excel in the nursing arena.

Veronica was an exceptional nurse and was always chosen to work with celebrities who were ill. Working as a nurse she provided to care to Bella Abzug, U.S Representative, social activist and a leader in the women’s movement.

Veronica enjoyed spending time and traveling with her daughter. Together they could be found taking a trip or a cruise out of the country or just enjoying Jamaican food or listening to her favorite reggae tunes at Lorna Restaurant in Queens NY. She enjoyed life to the fullest!

Veronica is survived by her Daughter Alethea Tater, Grandson Joshua Tater-Anderson, her and sister and brother Elise Smith and Lyric Patrick Smith, her niece Seana Smith and Grandniece Gabriella Clayton her nephews Craig Smith and Andre Smith. Along with a host of God Children all of whom she loved and touched deeply.

To send flowers to the family or plant a tree in memory of Veronica Tater, please visit Tribute Store
Friday
11
June

Share Your Memory of
Veronica
Upload Your Memory View All Memories
Be the first to upload a memory!
Share A Memory
Send Flowers
Plant a Tree