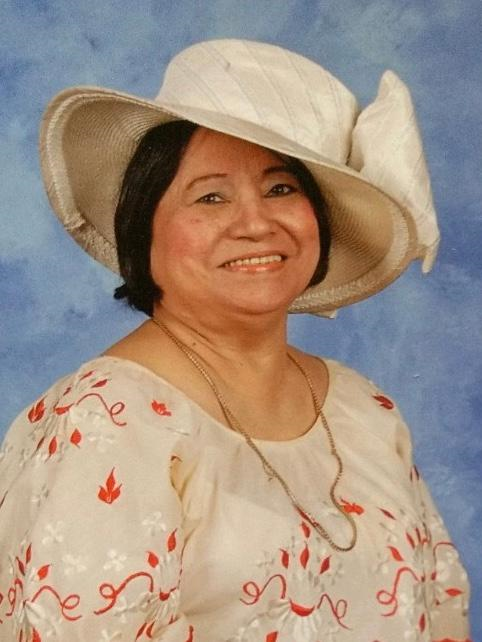 Please share a memory of Sylvia to include in a keepsake book for family and friends.
View Tribute Book

Sylvia Sangle Purvis, 77, passed away, on March 3, 2021, 26 days after holding the hand of her beloved husband of 47 years, Rev. Eugene Purvis, Sr., at NYU Langone Hospital, when he passed away, on February 5, 2021, of natural causes at age 97.  They were deeply connected with each other, and she was heartbroken after his passing.  Sylvia was a loving wife, mother, and grandmother, who enjoyed laughing and singing.  She was a devoted believer in God, who prayed each day, both individually and together with her husband.  She would also write down the names of her sons, daughters-in-law, and grandchildren in her prayers, asking God to keep them safe and healthy.  Sylvia loved wearing her church hats on Sundays and special occasions.  “Ave Maria” was her favorite song.

Sylvia was born in Santa Cruz, Manila, Philippines, on November 26, 1943, to her father, Marciano Sangle, and mother, Gorgonia Tanchoco Sangle, who both precede her in death.  She was the second youngest daughter of seven children.  The eldest and only son, Manuel, died at the age of 27.  Next in order came Pilar Sangle Pangan, Nora Sangle, Aida Sangle Wilms, Rosalinda Sangle San Vicente, Sylvia, and the youngest Josephine Sangle (all deceased, except Aida and Rosalinda).  Sylvia attended elementary school and high school at a private girl’s school called Santa Isabel College in Manila.  In addition to English, she spoke Tagalog (Filipino language) and Spanish.

After graduating in 1966, with a bachelor’s degree in optometry, at the University of Santo Thomas in Manila, Sylvia traveled to New York City, in 1970, to obtain a master’s degree in optometry.  In NYC, she stayed with her uncle, Joseph Sangle, and worked at Sterling Optical in Manhattan, where she fell in love with her co-worker, Rev. Purvis, who was also an optometrist.  During a time when interracial marriages were rare, Sylvia married Rev. Purvis, and they and had three sons, Eugene, Jr. Alexius, and David.  The Purvis family moved to Long Island and lived in Hempstead (1975-1980) and Roosevelt (1980-1991), until Rev. Purvis and Sylvia found and moved to their dream home in Freeport in 1991, where they lived until they passed away.

While living on Long Island, Sylvia transitioned to becoming a licensed educator and business owner, while Rev. Purvis continued to work as an optometrist, and also served as a pastor in the African Methodist Episcopal Zion Church (over 50 years).  Sylvia and Rev. Purvis owned and operated the Children’s World Montessori School, in Freeport, NY, for over 30 years, starting in the 1980’s, for students in grades Pre-K to third grade.  She was an excellent teacher who knew how to get the best out of each student.  The dedication of both Rev. Purvis and Sylvia to the pursuit of excellence in education led to them being proud to say that all three of their sons graduated from the University of North Carolina at Chapel Hill.

Sylvia and Rev. Purvis became well known in the community, after Rev. Purvis received recognition for his 97th birthday and his service in World War II.  Over the years, family members, such as Sylvia’s sister (Aida Wilms) and nieces (Glenda and Cindy Nelson), as well as Bill Tetreault and Doug Green, and countless other individual volunteers and organizations, assisted Rev. Purvis and Sylvia with donations, home repairs, and healthcare needs, including, but not limited to, the AME Zion Church, Freeport Cares, the Salvation Army, the United Way, Holy Redeemer Catholic Church, Catholic Charities, Promise of Hope, Equity4LIYouth, Island Harvest, Rebuilding Together, All Boro, and the Village of Freeport government.

To God be the Glory!

To send flowers to the family or plant a tree in memory of Sylvia Purvis, please visit Tribute Store
Tuesday
6
April

In Lieu of Flowers please donate:

The family of the late Sylvia Purvis has requested monetary donations be made to the family in lieu of flowers. Zelle Payments can be made to (516) 320-0327 PayPal- Alexius.Purvis@gmail.com Checks Payable to: Alexius Purvis or Eugene Purvis, Jr.
Online Memory & Photo Sharing Event
Online Event
About this Event

Share Your Memory of
Sylvia
Upload Your Memory View All Memories
Be the first to upload a memory!
Share A Memory
Send Flowers
Plant a Tree