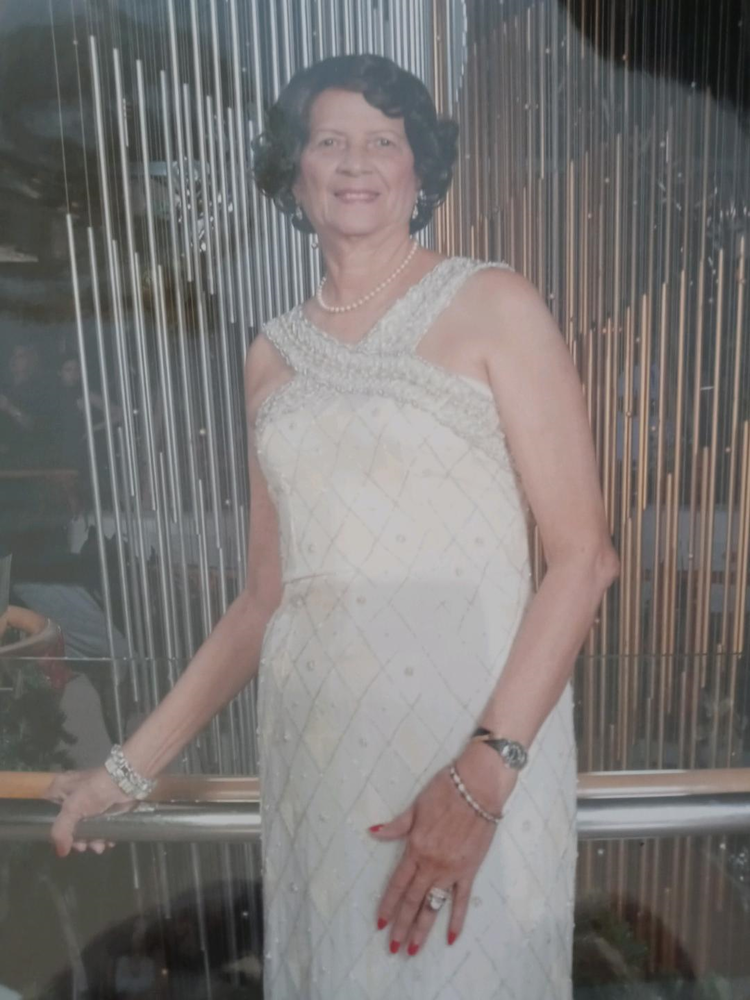 Please share a memory of Josephine to include in a keepsake book for family and friends.
View Tribute Book

Josephine Marie Edwidge Joseph-Noël was born October 17, 1924 in St. Pierre, Martinique, F.W.I., to Joseph Pain and Eugénie Eugéne.  One of six children, this great beauty showed her adventurous spirit when coming to the United States as a young woman of 19, several years after her mother’s untimely passing.  Travelling alone on a steamship to the port of New Orleans, she made her way to New York City, where she attended Hunter College and learned to speak English.  Skilled in lace making and sewing, she quickly found work, and began making connections that would last a lifetime.  She met her first husband, Sauvignon Barty, with whom she had 3 children of her own and became mother to his daughter.  They moved to St. Albans, NY.

Josephine’s can-do attitude prevailed, as she opened her home to take care of several children in order to help provide for her family.  As time went on her marriage dissolved, and she made the decision to start anew.  She reconnected with her long-lost love, Georges Joseph-Noël, whom she had presumed dead in the war.  Very much alive, he had been looking for her, and once they found each other, Josephine started another adventure.  In 1975 they were married, and made their home in Martinique, where she used her cosmopolitan background to gain a position at Chase Manhattan as the Foreign Currency exchange officer.  From there, they travelled.  Neighboring islands of Dominica and Guadeloupe were their stomping grounds, but they set out all over the world- Montreal was a favorite destination, as was France, and even Mexico.

Yearning to be closer to her family, Josephine and Georges moved to Ronkonkoma, NY, where Josephine was a beauty consultant at Stern’s department store.  She and Georges were very active, and she competed in and won several swim races.  She and Georges loved to swim.  So much so, that on one vacation in Acapulco they climbed the fence to the closed beach, and frolicked in the waves.  They were called to safety by hotel staff, who then informed them that they had been swimming in shark infested waters!

As they got older, Georges and Josephine spent a lot of time at their winter home in Miami, which eventually became their forever home.  They continued to travel, taking cruises to storied places such as the Panama Canal, and on her favorite ship, the Queen Elizabeth 2.  Always curious, she wanted to be one of the first passengers on the colossal Queen Mary 2, and when asked what her favorite part of the trip was, she raved about the buffet first, and the casino second.  Always up for excitement, Josephine got many a thrill from playing slot machines at casinos, whether on a cruise or on dry land.

Josephine’s greatest loves were her children and family.  With each birth of a grandchild, and then great-grandchildren, she was delighted.  She made it a point to be at each of their milestone celebrations- graduations, weddings, and births, and was also there to support them during their times of loss.  She was an anchor, the matriarch and a straight shooter.  She was not a sentimental person, but she loved with her whole heart.  The world is a lot less beautiful without her in it.

In Lieu of Flowers

Share Your Memory of
Josephine
Upload Your Memory View All Memories
Be the first to upload a memory!
Share A Memory
Plant a Tree