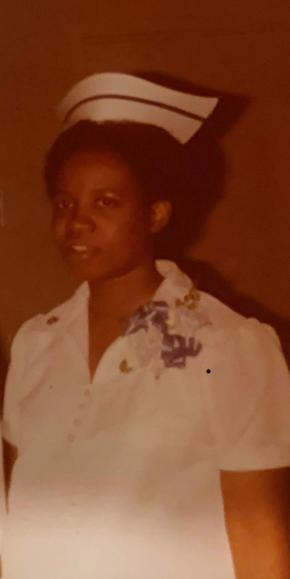 Please share a memory of Ashlyn to include in a keepsake book for family and friends.
View Tribute Book
Ashlyn Dumile (nèe Thompson) was born January 8, 1952, in Penal Rock Road, Trinidad & Tobago, as the sixth child of Henrietta and Joseph Thompson. At age 3, her family moved to Marabella, where she would later begin her primary education at Marabella Girl's EC School. She graduated, with honors, from the prestigious St. Joseph's Covent in San Fernando, Trinidad, before immigrating, as a permanent resident, to the U.S., in the summer of 1969; her family, settling in Long Beach, New York. She would go on to complete a U.S. high school curriculum at Long Beach High School, and attend classes at Molloy College, before graduating from the nursing program at the Vocational Education and Extension Boards of N.Y., in 1977, to become a Licensed Practical Nurse. Ashlyn married Daniel J. Dumile (1973-1981); and became mother to three sons, Daniel (DOOM, preceded in transition; married to Jasmine Dumile), Dingilizwe (Raheem, preceded in transition), and Dimbaza, and a daughter, Thenjiwe. As a mother, she led by example, as a loving (sometimes tough-loving), nurturing, and hardworking provider, that believed in seeking and following her own path toward the life she envisioned for her family. Ashlyn's progressive approach to life, would serve to foster alternative paths in spirituality, embracing early foundations of faith in Catholicism, and later Christianity and Islam (she studied and read the Arabic text of the Quran, and fasted during Ramadan). She embraced naturopathic health & wellbeing--having adopted a vegetarian diet and practiced meditation and yoga, decades before it would become widely accepted. Her creativity was demonstrated in her skill for sewing--often crafting her own clothes, infused with her Afro-Caribbean heritage and influences of faith, while also being inspired toward entrepreneurial endeavors—most remarkably, creating an original design that would inspire an early version of the wearable baby carrier. Ashlyn was an avid reader and brilliant learner—embracing emerging technologies early, despite her advancing age. She had an innate talent for language arts and the written word, which would, undoubtedly, go on to be inherited as part of a prolific legacy that can be credited with her sons' artistic accomplishments. Later on, being a doting grandmother was her own time to shine. Ashlyn was loving Grandma to D.J., Virginia Marie, Sean, Malachi (preceded in transition), Justice, Laila-Jaz, Ninti-Re, Sirius-Li, and Master EA; Ashlyn would relocate to Georgia, before eventually spending a year traveling overseas, to help in raising her youngest grandchildren. She was so proud, excited and blessed to also have become a great-grandmother to Robert. Ashlyn transitioned, on January 31, 2021, at her daughter's home in Atlanta, GA. As a revered matriarch, she leaves behind, a foundation of faith, a proud legacy of nurtured creativity, artistry, and commitment to family, and is honored, in celebration of her life by her surviving children, among so many others. Ashlyn is preceded in transition, by siblings James Thompson, Danny Alvin Thompson, Nesa Thompson, Keston "Sonny" Simon, and is survived by her siblings Shirley (Willie) Williams, Jacqueline (Randolph, deceased) Baptiste, Marlene (Michael) Mitchell, Rosemarie Thompson, Lystra (Joseph) Ryce, Lydia (Arthur) Vinson, Peter Thompson, and Maria Thompson, along with extended family members including cousins, nieces and nephews. Please join us in our prayer that she is welcomed into Paradise, surrounded by Love, Light and an Eternal Peace.
To send flowers to the family or plant a tree in memory of Ashlyn Dumile, please visit Tribute Store
Friday
19
February

Share Your Memory of
Ashlyn
Upload Your Memory View All Memories
Be the first to upload a memory!
Share A Memory
Send Flowers
Plant a Tree