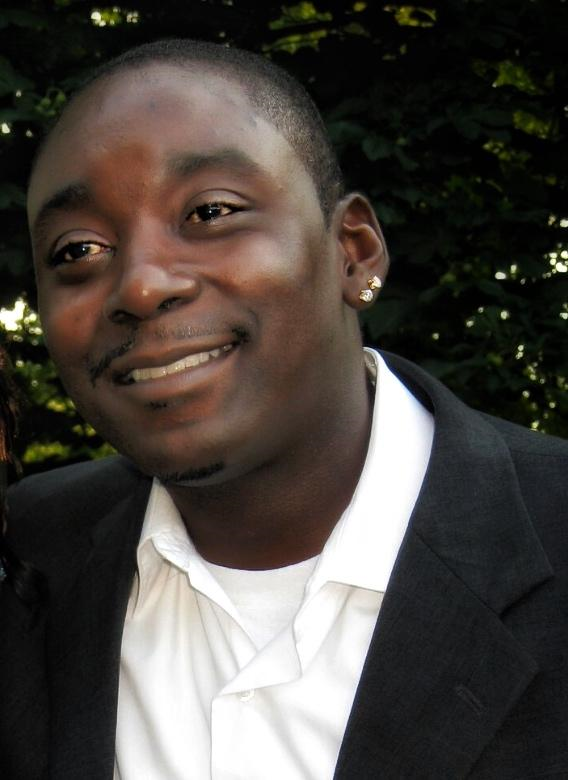 On February 10, 1970, the Ravenell family welcomed with excitement their only boy into the fold. From the outset Derek Shaun Ravenell was full of energy, creativity and mischief. Since his sisters were 12 and 15 years older, after a while he seemed like an only child. But growing up in Roosevelt, Exit 21 on Hausch Blvd, Derek always had a crew. This group of boys & girls were tough, they played sports against other blocks, learned how to rap together, hung out - and got beat up together! They made life long bonds.

Derek was a stellar athlete who played basketball, football, and ran track. At Holy Trinity High School his 4X400 meter relay team became the 1988 State champs- where their state record still stands to this date - and the US National runner-up. To hear him tell it, football was his best sport. Track was simply the one that could take him the farthest but he was a baller at heart.

Later that fall, Derek went to the University of Maryland on a track scholarship and in 1993 graduated with a degree in Kinesiological Sciences. Three of his childhood friends from Roosevelt were his roommates. His college experience was rocked by the death of one of his best friends, Harvey Charles. It made him wonder why he was spared, but helped him to determine his purpose in life. Derek focused on making an impact on the youth in our community. He did so with such passion, commitment and relatability.

Derek wore many hats. In 1999, he returned to secure a certification from New York University in Sports, Entertainment, & Event Marketing. Derek was an Assistant Coach of Rutgers Women’s Basketball team where he had a strong focus on recruiting. He also worked as an athletic/personal trainer and bodywork professional at One to One Fitness in NYC prior to moving back to the Maryland-DC area to work at Stretchzone Inc. and The Fitness Company, as general manager

During his time at The Fitness Company he would meet his future wife, Shermaine. They seemed to click instantly as they went through great lengths to make sure they stayed together. In June 2008, Derek married Shermaine Claiborne and became stepfather to her three children Tykia, Rashad, and Troi after being together for 8 years. He poured himself fully into his children. He was their coach and mentor and inspired them to be their best in school, in sports, and in life. He was their biggest advocate.

Derek loved to see kids smile, and he loved to make an impact on any community or place he worked. Through this position at Howard University, Derek found himself in an outreach position inside of Benning Terrence, located in Southeast DC. This place was known for a lot of things, not so many of them were good before Derek arrived.

Within this community Derek started basketball teams, organized days out on the town for the kids, helped parents get jobs, hosted food drives, and so much more. As Program Coordinator for CityGate Inc. he created and executed summer fitness programs for middle school students at Cardozo High. He also performed interventions and mediations to help prevent violent and deviant attitudes and behaviors at Bladensburg High School as a Youth Advisor in Southeast DC.

The mark that Derek left on this community was amazing, and he went to great lengths to bring the people he loved along for this journey. In true Derek fashion, he got his friends coaching jobs, hosted parties with his family for kids in that community and even took people in during their times of distress, while never asking for anything in return.

Derek was always high-energy, smiling, and ready to make a difference. He could be best caught hanging with students freestyling, cracking jokes, or in the ‘black box’ asking you how you ended up there- and what you should do next time instead. Derek enjoyed working with kids and creating a better life for them, as opposed to how everyone else thought they’d be. He was a truly inspirational, to not only his family, but to everyone he encountered.

Over his career, Derek created sports teams and life skills programs to teach young people about preventative approaches and development strategies. He increased opportunities for youth by developing strategic partnerships with various businesses, schools, recreation departments, police departments, and government agencies. He created SPICE, a yearlong program that provided opportunities for underprivileged youth. Derek continually aimed to foster positive physical, mental, and spiritual growth in those he reached. This was his calling.

After some time, Derek found himself looking for something more for his family and decided to move closer to his home. He took his whole family with him, and moved up to Maplewood, New Jersey. After his youngest children graduated from Columbia High School, the family decided as a unit to return to DC. Here Derek continued cultivating his SPICE program. This landed him a job at One to One fitness, then Fitness First where he last worked.

The latter years of Derek’s life were spent taking care of his own parents. He and Shermaine returned home to Roosevelt to become caretaker for his 92-year old father James Ravenell. In the process, he helped his mother Carrie Ravenell and sister Brenda Ravenell who all resided together.

When he was stricken with colon cancer in 2017 he fought, what seemed to be effortlessly and without any contempt. In true Derek Fashion, he continued to take care of his parents, and his wife for all the time he could. Derek battled the disease like the warrior he was and without complaining. So many family and friends visited him in the hospital that it was a testament to his glowing personality and gave him comfort to the end.

He is survived by his parents James and Carrie Ravenell, his wife Shermaine Ravenell, and children Tykia Claiborne, Rashad Hammonds, and Troi Hammonds; along with his grandchildren Tymir Pryo , Kaiden Claiborne and Malaysia Claiborne, his parents-in-law Gloria Bush and Edgar Claiborne; his sisters Brenda Ravenell and Daneen Cooper; his brother-in-laws Maurice Cooper and Edgar Claiborne; his sister-in-laws Tamika Claiborne, Tiffini Martin and Tammy Bush; a host of nieces, nephews, cousins, and a multitude of friends.

Share Your Memory of
Derek
Upload Your Memory View All Memories
Be the first to upload a memory!
Share A Memory
Send Flowers