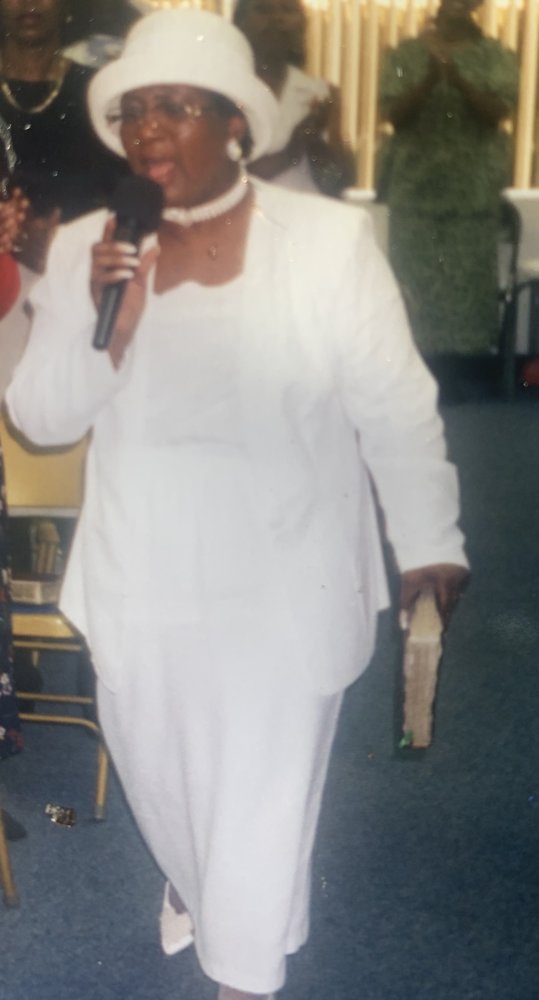 Peggy Lee Watkins was born in Monroe, Louisiana on September 12,1950. She was one of 8 children born to the late Mr. & Mrs. Elder Burton Briggs and  Dorothy Briggs.

As a young child she realized the calling of God in her life then got baptised at Riverside Missionary Baptist. This is also where she discovered her passion for singing in the choir; which she would continue to do throughout her life.

Peggy attended J.S. Clark Elementary School and Carroll High School in Monroe, Lousianna. In 1968 at the age of 18, Peggy came to Long Island, New York with her daughter Suzanne Brown born April 24,1966. She began working as a Key Trust Operator at Long Island trust Bank as well as the family store Flo and Larry’s Superette.

In the late 1970’s Peggy decided to transition careers into the medical field. She attended Nassau Community College and Old Westbury University where she graduated in August 6,1982 with her degree in Licenced Practical Nursing.

She began her career working in various Nursing homes and hospitals throughout Long Island, Brooklyn and Queens until she found her passion for Private Home Nursing. She was an advocate for the elderly and sick and found most Joy assisting with these patients.

Throughout this time Ministry and spreading the word of God continued to be the forefront of her life. Upon coming to New York she attended Prayer Palace, in Brooklyn, new York under  the lead of late Rev. Charles Churn Jr. Peggy sang and led the choir until becoming a member of the good New Faith Tabernacle in 1996.

She was ordained an Evangelist by the late Pastor Sarah Thomas June 27th, 1999 at Good New Faith Tabernacle of Hempstead, New York. She continued her life's work there as the Choir Director for over 20 years as well as ministering the gospel.

Along with advocating for the sick in her career, and spreading the word of God Peggy Dedicated her life to helping those in need. She volunteered her time and efforts wherever needed.She sang at nursing homes and jails, fed the hungry, assisted in transportation, and provided nursing services to all those in need. She will be remembered as being benevolent and generous to all.

Peggy will especially be remembered for her wonderful baking abilities. All of her family and friends will miss her famous Carrot Cake, Sweet Potato Pie and Carrot cake just to name a few of her specialities. Due to the popularity of her famous desserts she started her own Business by the name of Peggy's Sunday Desserts.

Peggy leaves behind a multitude of family and friends who will miss her dearly ;and joimed those who she has already reconnected with in heaven. She is survived by Her Children Suzanne Brown, Emory Watkins, and Rhema Watkins. Her Grandchildren Daquan Watkins, Zayre Watkins and an upcoming birth. Siblings  , Michael Briggs, Mary Anne Johnson, Dorothy Reed and Eva Briggs. Preceding her in Death  Husband Emory Watkins ,  Son Fredrick Watkins.  Parents Elder Burton and Dorothy Briggs. Siblings Caesar Briggs and Carol Briggs - and Howard White.

To send flowers to the family or plant a tree in memory of Peggy Watkins, please visit Tribute Store
Saturday
29
August

Share Your Memory of
Peggy
Upload Your Memory View All Memories
Be the first to upload a memory!
Share A Memory
Send Flowers