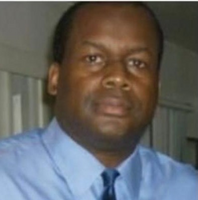 Reginald  “Reggie”  Nelson was born on the 30th of November 1956 to the late Thomas Glover Nelson Sr. and Annie Joyce Smith Nelson in East Meadow, NY. As one of many children, Reggie was known to be hardworking, passionate, quick-witted, and strong-willed among his close family and friends. He attended Malverne High School and later obtained his CDL, beginning what would be a 30-year successful career as a commercial truck driver, proudly earning “5 Million Miler” status. In 1979, Reggie welcomed his next-door neighbor and soon to be best friend, Vernell Holland, to West Hempstead. Three years later, on May 6th 1982, they married.  From this union, Reggie was blessed with two stepchildren, Varrick and Valerie Holland, and years later with 3 daughters: Renee, Robyn & Ralanda Nelson.

A faithful servant of God, Reggie epitomized agape love and invested his time, his talent, and his treasure into his family, his friends and his community. A brilliant mind, a devoted husband and father, he valued learning, the arts and culture.