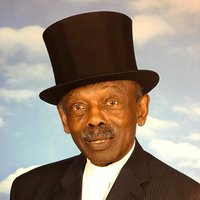 Rev. Dr. Eugene Herbert Alexander Purvis, Sr., 97, passed away on February 5, 2021, while holding his beloved wife’s hand at the hospital.  Rev. Purvis was a loving and humble husband, father, grandfather, and servant of God.  He was an easygoing man, with a great sense of humor and wisdom, who could hold long conversations about anything, and was fired up when he spoke and gave sermons about God.  He always wore a fedora hat reminiscent of the 1940’s, and when he wore his top hat, you knew it was a special occasion.  “Blessed Assurance” was his favorite song.

Rev. Purvis was born on June 18, 1923, and lived on a farm in Salters, South Carolina.  He was the son of Rev. Dottie Alexander Purvis and Annie Bradley Purvis.  He was the oldest of 18 children, five of whom died at birth.  He graduated from Tomlinson High School in Kingstree, SC.

As a young man, Rev. Purvis joined the military during World War II, serving in the 20th Army Air Force, 435th Aviation Squadron, a unit of African American soldiers, in the South Pacific Ocean Theater.  He was an Aerial Gunner and handled bombs for the Boeing B-29 Superfortress.  Rev. Purvis survived an aerial assault of Japanese bomber planes on the island of Saipan, by diving into his foxhole, and lost many friends.

After serving from 1943 to 1946, Rev. Purvis received an honorable discharge, and moved to New York in 1946.  He attended New York University for Arts and Science, and the New York Theological Seminary to pursue studies in Christian Ministry.  He worked as an optician at Sterling Optical, in Manhattan, NY, and later became an Examiner on the NY State Board of Opticians.

While working in New York City in the 1970’s, Rev. Purvis fell in love with his new co-worker, Sylvia Sangle, another optician who had immigrated to the U.S., from the Philippines.  During a time when interracial marriages were rare, and at age 50, Rev. Purvis married Sylvia.  They were married for 47 years and had three sons.

Rev. Purvis loved serving God in the African Methodist Episcopal (AME) Zion Church for over 50 years, and never officially retired.  In 1968, he became an ordained Elder.  Rev. Purvis pastored several churches, including Lakeville AME Zion (1970-1980), in Manhassett, NY; Naomi Temple AME Zion (1980-1992), in Roosevelt, NY; Williamsburg AME Zion (1992-1994), in Brooklyn, NY; and Shaw Temple AME Zion (1994-2003), in Amityville, NY.  His accomplishments at each church are too many to mention, but include church building improvements.

In 1992, Rev. Purvis and his wife moved to their dream home in Freeport, NY.  They also owned and operated the Children’s World Montessori School, in Freeport, NY, for over 30 years, starting in the 1980’s, for students in grades Pre-K to third grade.

As a testament of God’s power, in 2002, at the age of 79, Rev. Purvis miraculously survived an open-heart surgery, where doctors had given him a two percent chance to live.  Due to his medical condition, Rev. Purvis also received amputations in both legs.  After rigorous physical therapy, he used prosthetics and a cane to continue standing up to preach the Word of God, as an inspirational guest preacher, at many churches over the next 17 years.  Rev. Purvis continued to proudly participate in meetings of the AME Zion Church New York Conference (where he was the oldest minister at age 96), the Long Island Council of Churches, and Freeport Cares, as well as manage the Montessori school.

In 2019, at age 96, Rev. Purvis was invited to preach what would be his last sermon, at the Williams Chapel AME Church, in South Carolina, the home church of his brother, William Purvis. Also, in 2019, Rev. Purvis was honored by all the churches he pastored, with a birthday celebration, coordinated by Sister Claretha Smith, and under the leadership of Rev. Keith Harris, Presiding Elder of the AME Zion Church Long Island District.

In 2020, Rev. Purvis became well known in his community, after receiving recognition for his 97th birthday and his service in World War II, with interviews by NY news media.  Over the years, family members, such as Sylvia’s sister (Aida Wilms) and nieces (Glenda and Cindy Nelson), as well as Bill Tetreault and Doug Green, and countless other individual volunteers and organizations, assisted Rev. Purvis and Sylvia with donations, home repairs, and healthcare needs, including, but not limited to, the AME Zion Church, Freeport Cares, the Salvation Army, the United Way, Holy Redeemer Catholic Church, Catholic Charities, Promise of Hope, Island Harvest, Rebuilding Together, All Boro, and the Village of Freeport government.

Rev. Purvis received so many recognitions during his life, and some include:  recognition for his 96th birthday by Bishop Dennis V. Proctor (North Eastern Episcopal District, AME Zion Church); citations from the Freeport Mayor and the New York State Assembly, in honor of his 97th birthday; Life-Time Achievement Award, Long Island Council of Churches (2017).

To God be the Glory!