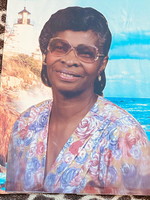 Gurzel A. Cummings was born April 18, 1938 to Celina Brown and Charles Christian in Montego Bay, Jamaica, West Indies. She was the youngest of 4 children. She learned to sew at a young age and became an avid seamstress, who valued and loved making clothes for family and friends. She departed this life to enter the loving arms of The Lord on September 13, 2020. Gurzel A. Cummings accepted The Lord at an early age. She was baptized into the faith at the Open Bible Church in Montego Bay, Jamaica where she became a member. She met Melton Cummings in the church and married him on June 28, 1958. They had and adored four children. Gurzel was a devoted wife, beloved mother, grandmother, sister, aunt, cousin and friend. She had a strong voice, deep sense of commitment and character. Those who knew her well knew that she could be counted on to give her best to assist those who were in need. She was caring and giving, always finding ways to help wherever she could and devoted to living compassionately. She contributed to others through sharing her sewing skills to everyone and anyone who asked for her services. Gurzel A. Cummings migrated to the United States in 1970. She became an active member of The First Baptist Church in Hempstead, NY where she was a member of the choir. She loved her church family. She was a woman of deep faith, who had a personal connection with her Heavenly Father. She had a deep sense of spirit and knowledge of God that was expressed in the reality of the way she lived her life daily. Gurzel cummings lived a full life Serving The Lord. She has simply transcended to be with The Lord. Preceding her in death is her father Charles Christian, mother Celina Brown, her two brothers, Stanley and Clarence Christian and her husband Melton A. Cummings. Gurzel leaves to celebrate her life, her son, Patrick Cummings, her daughters Donna Cummings, Charlene Blackman and Sandra Sibblies. Eleven grandchildren, Terrell Marrow, Mario Blackman Jr., Monique Marrow, Carlos Blackman, Oneil Blackman, Diamond Blackman, Tomiah Smith, Donovan Sibblies, Jr., Crystal Blackman, Shyanne and Shannel Sibblies, 4 great grandchildren, 2 sons in laws, Mario Blackman, Sr. and Donovan Sibblies, Sr. and a host of nieces, nephews, cousins and friends. We will truly miss her spirit, humor and love.