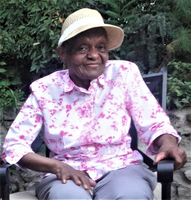 The Legacy of Leila Bell Corbitt-Gordon Leila Bell Corbitt-Gordon was born on August 18, 1933 to David Corbitt and Lela Holmes-Corbitt. She departed life on Wednesday, January 8, 2020 at New York Presbyterian Allen Hospital, New York, New York. Leila's early education began in Burgess, South Carolina, where she attended St. Rosenward Elementary school and then Whittermore High School in Conway, South Carolina, where she graduated in 1951. Leila continued her education by attending the Morris College in Sumter, South Carolina where she graduated after 4 years with Bachelor's degree in Elementary Education in 1956. Leila, being a woman who aspired for moving ahead left South Carolina and went to New York where she met and later married George William Gordon, Jr. Leila worked various jobs in her early years but went on to become a certified nursing assistance where she worked for many years and retired at the Long Beach Nursing Home at the age of 72 years. Leila was a loving, giving and quiet woman whose faith in God was everlasting. Although she did not have a church home, she based her life on the principle of the bible and made her children followed that same course. Her favorite bible verse was the 23rd Palms. Leila was a devoted and loving wife and mother. She was preceded in death by her husband, daughter, Sharolyn Gordon, parents and 2 sister, Rosa Lee Auston and Mary Alice Baker. She leaves to cherish her legacy, 3 children, Doris Gordon, Sheila Gordon-Conze, Henri Conze (son-in-law) and George Gordon, III, 3 grandchildren: Shavone Kennedy, Shannon Kennedy, Lauren Gordon and 7 siblings: Eleanor Smalls, Sally Moody, Susie Carr, Della Corbitt, Jennie Myres, Annie Rutledge, Elizabeth Ann Corbitt and a host of nieces, nephews, other relatives and friends. In loving memory, The Family